Brutaltops Episode 111: A Pathetic Slave is Tortured as Ashtray, Forced drinking beer, eat spit, rim two Master’s asses…and force jerk off. In the end, he was farted by Master Dereak and Master Toby! 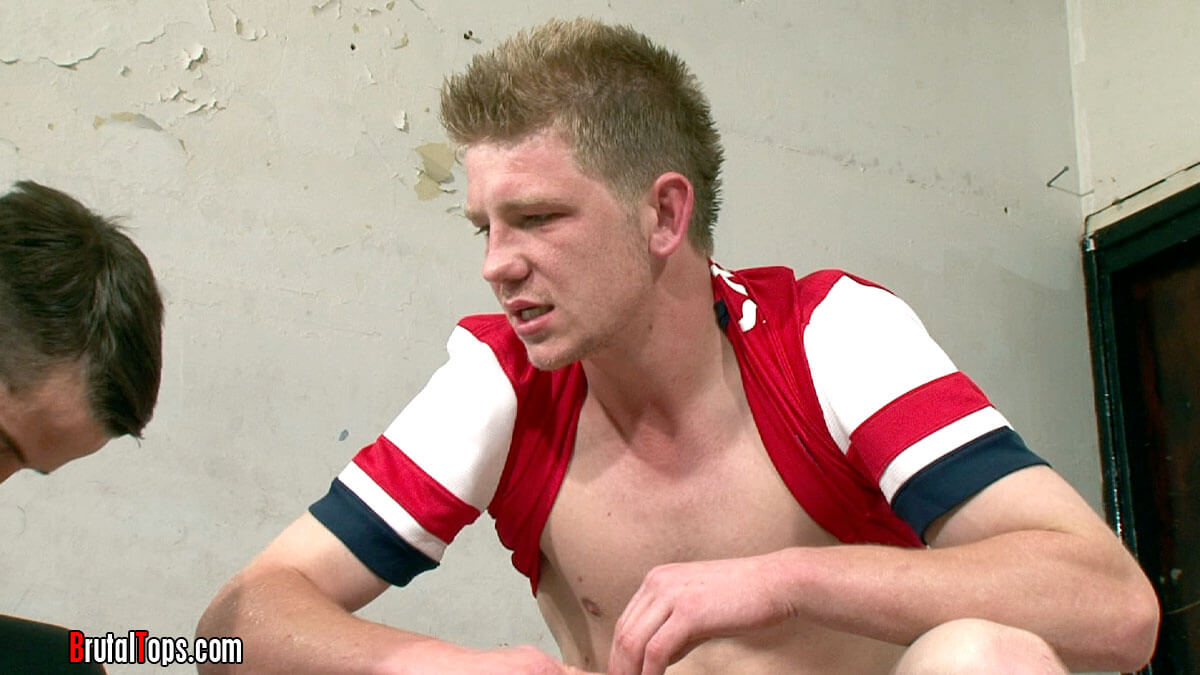 With its tiny cock stuffed painfully in a chastity cage, sub ben has been installed as the Top’s ashtray.. Football hooligans Derek and Toby are enjoying a leisurely smoke with their beer, ashing their cigarettes in the sub’s mouth. 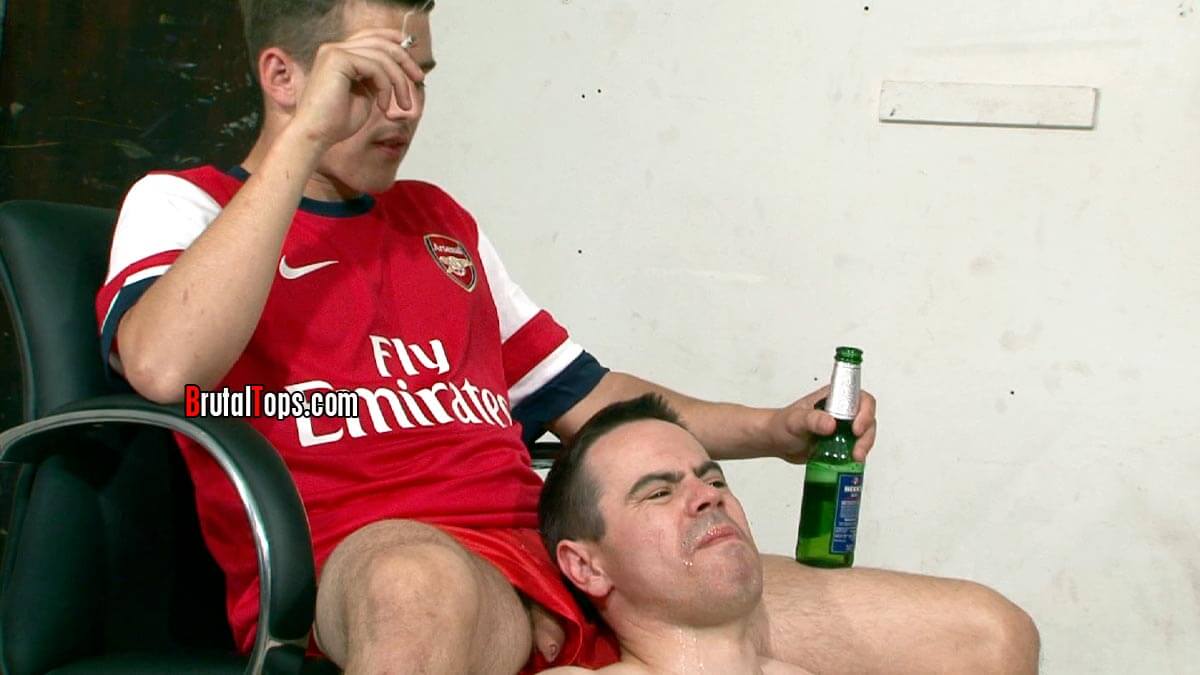 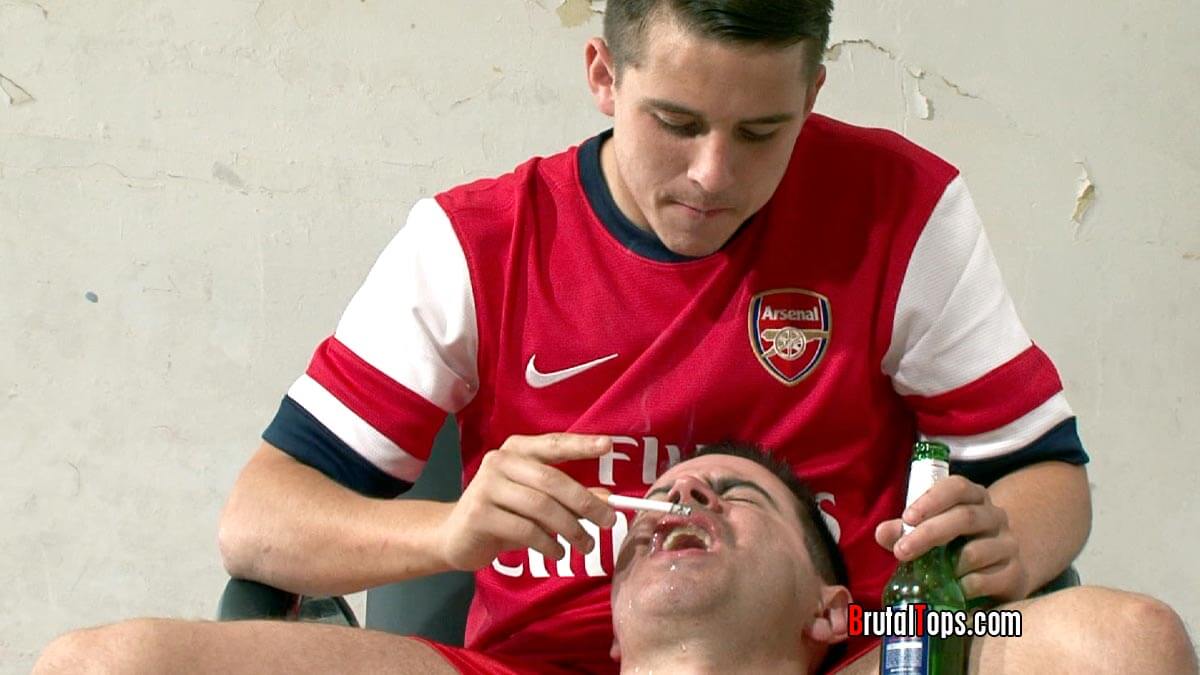 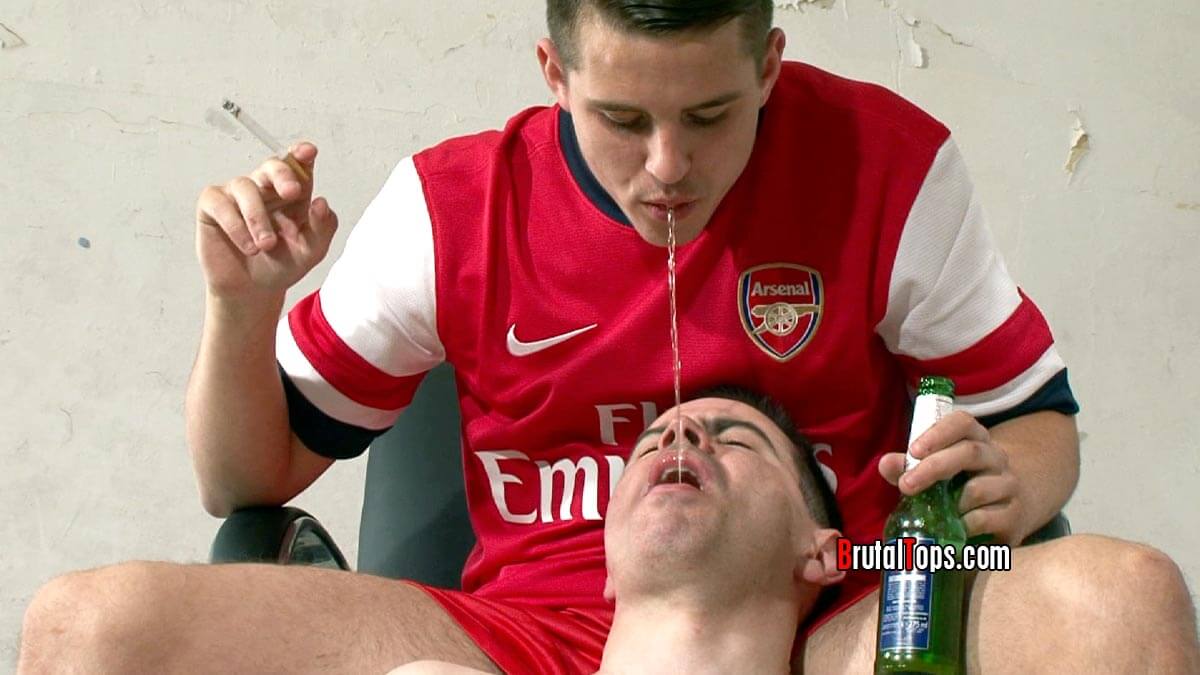 When ben forgets to thank Master Toby for allowing him to be his ashtray he gets a kicking from Derek. If there is one thing these Tops dislike the most, it’s sloppy ungrateful subs. Just as well ben is serving two of the nastiest bastards at Brutal Tops Inc. they’re always more than happy to punish a sloppy cunt like him, showing him his rightful place. 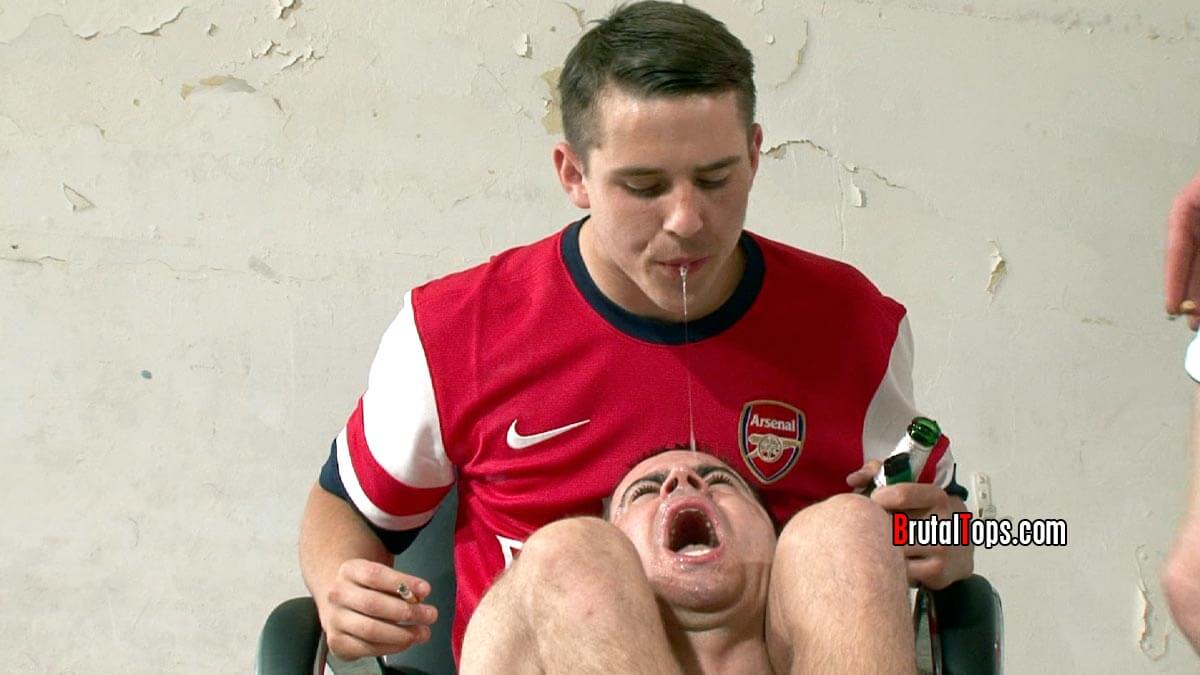 Ben is devouring his Master’s diet of fag ash, beer and gob as quickly as it is supplied, but it still isn’t good enough to meet the high standards of Master Derek, who boots the useless cunt a couple more times for good measure before he and Master Toby extinguish their cigarettes in the sub’s mouth. 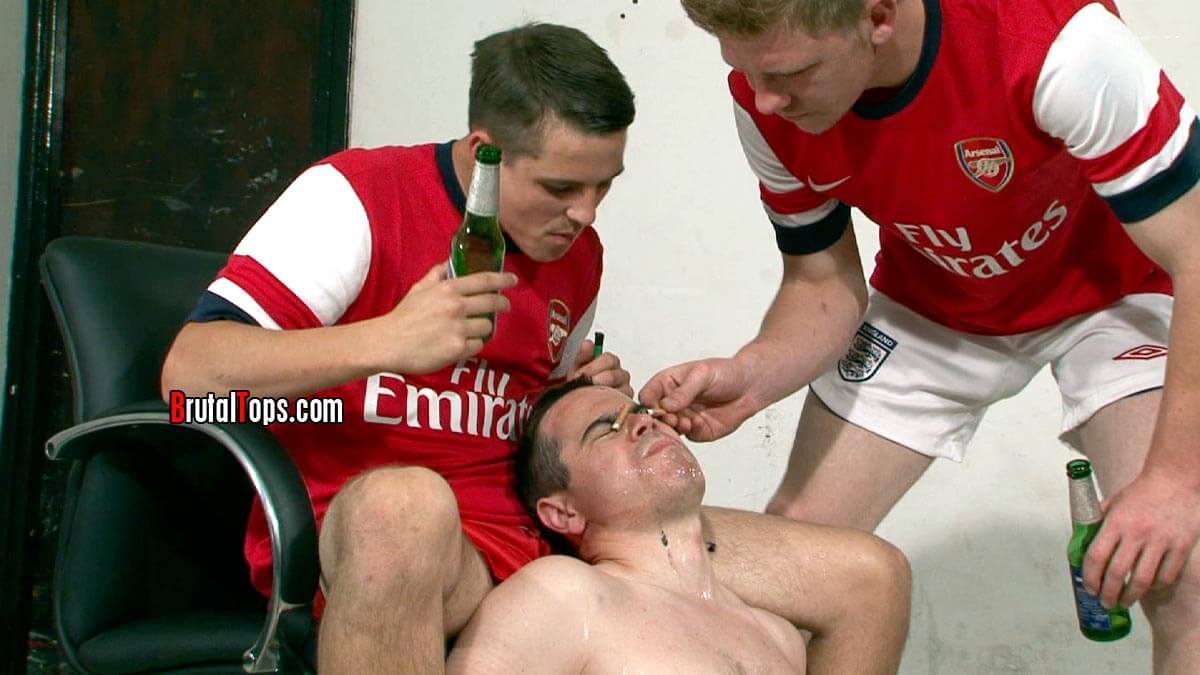 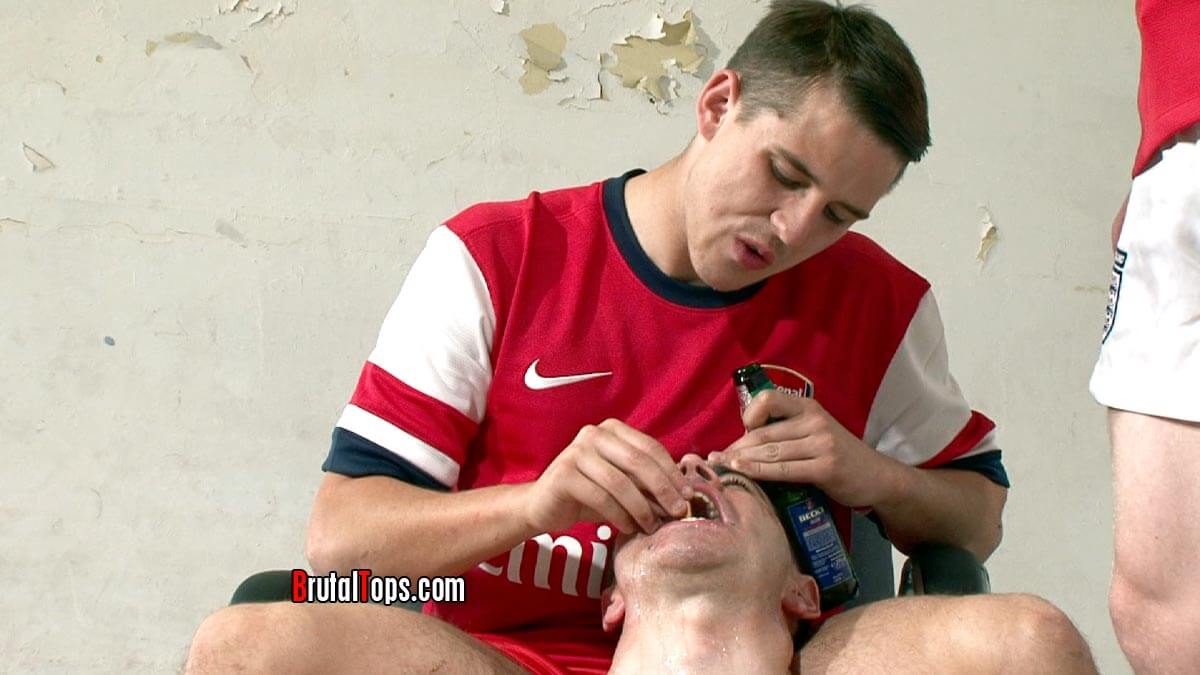 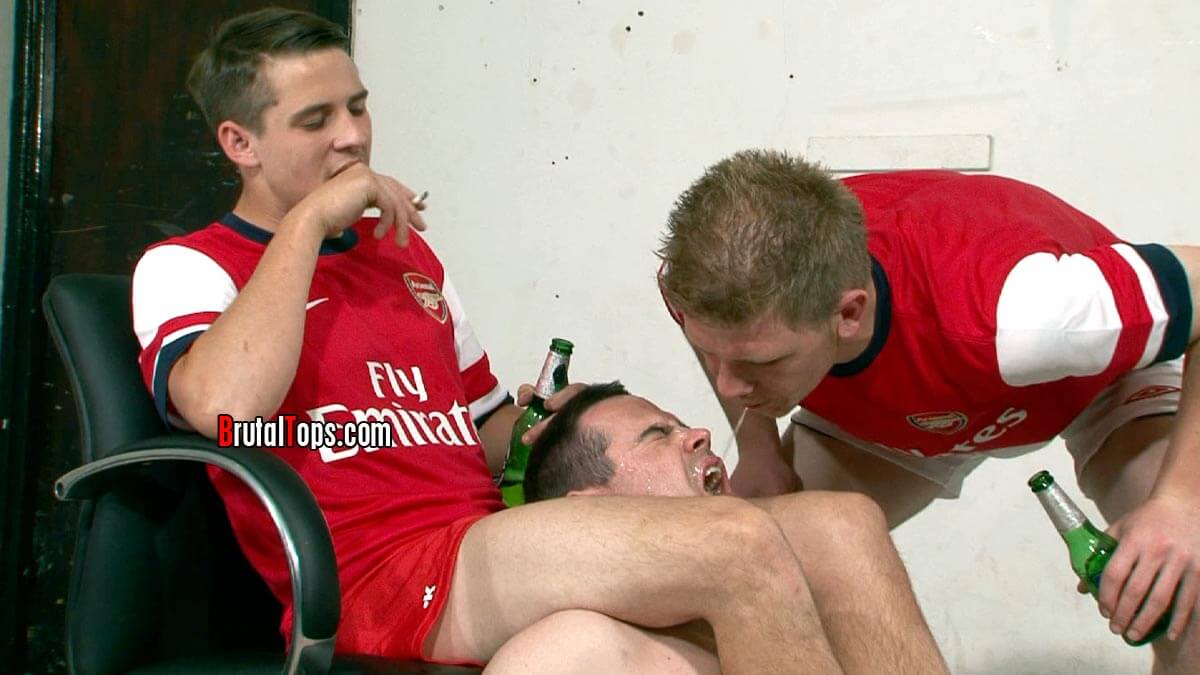 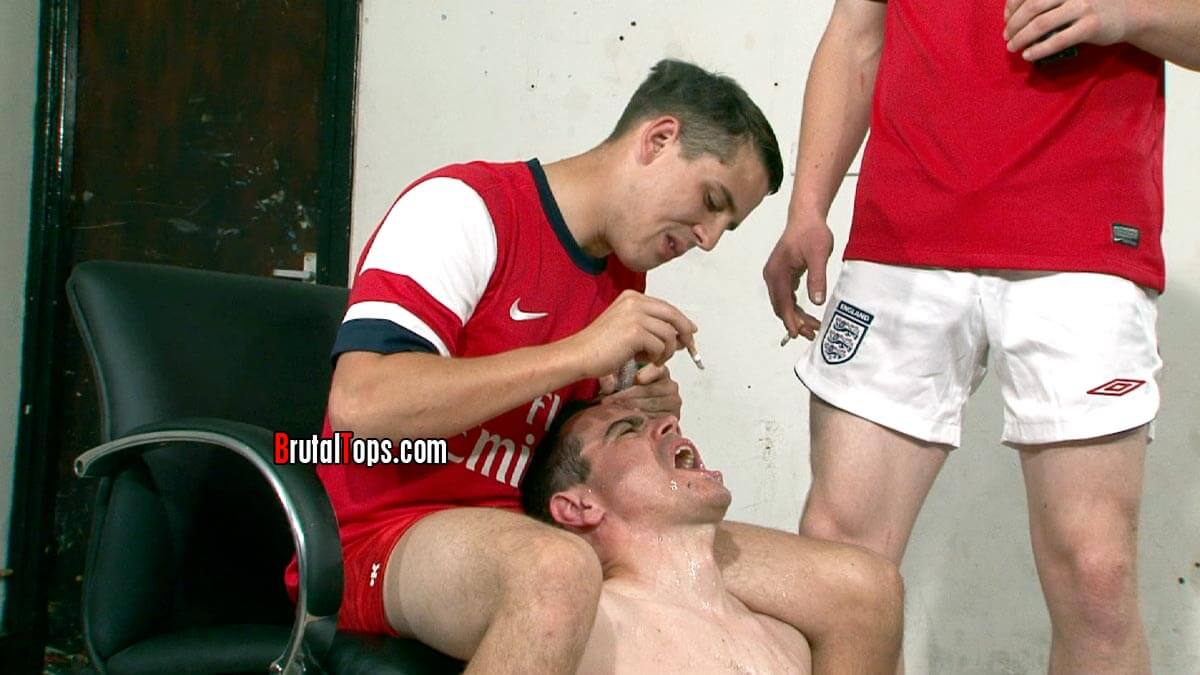 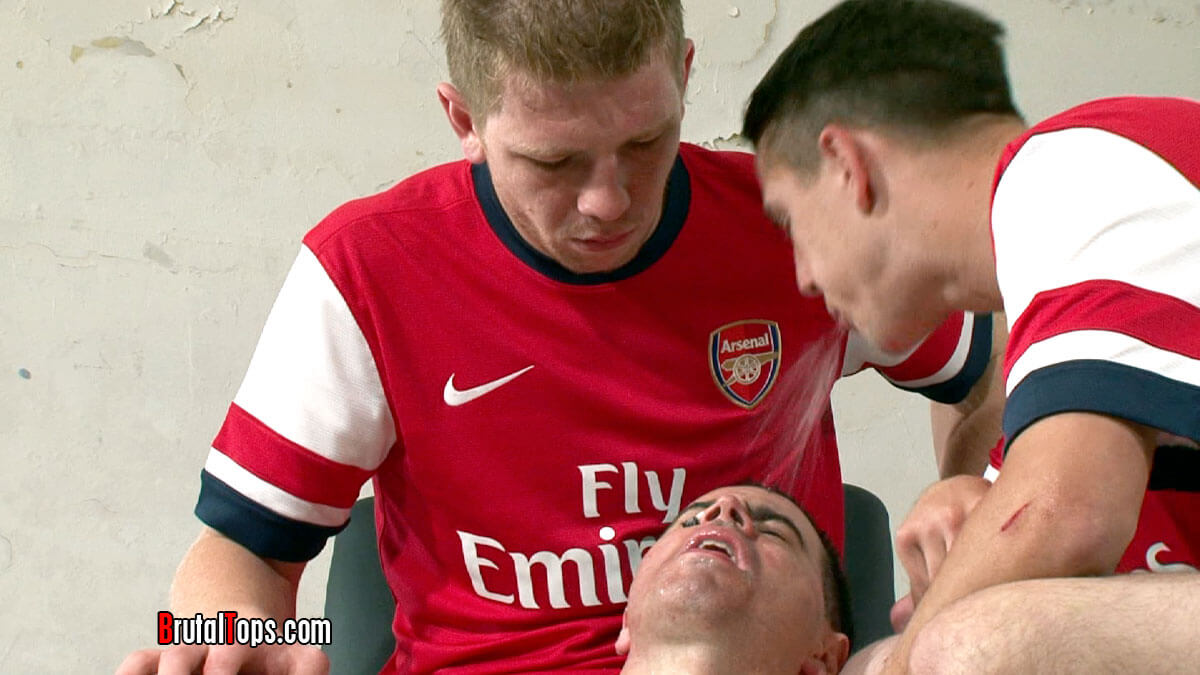 Toby releases ben’s cock from the tight confines of the chastity cage; He has a plan to humiliate ben by making him ejaculate in front of them. Derek orders the sub to play with it’s cock until it gets hard, but not getting the result fast enough, Master Derek manhandles the sub onto its back on the floor. 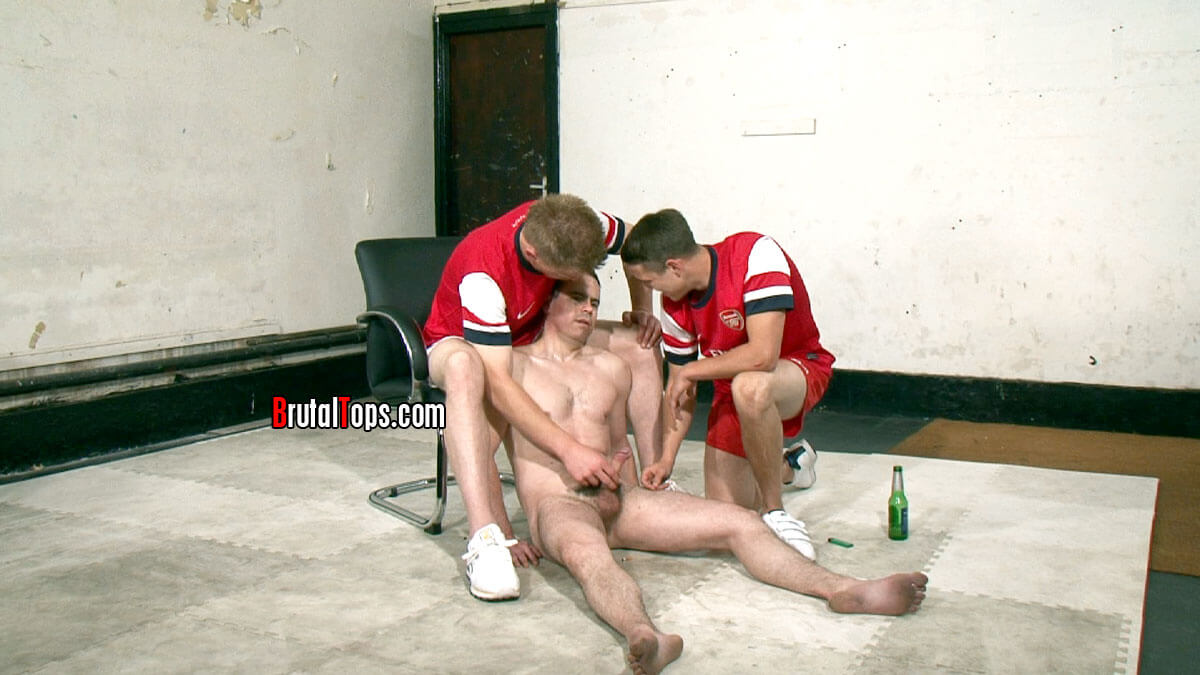 Toby and Derek display their power over ben, towering above him as he frantically tries to wank his cock to an erection for them. Taking a step onto ben’s shins, Master Derek then walks up it’s body, trampling it’s semi hard penis in the bargain, making ben cry out in agony at having the tread on Master Derek’s size 10 trainers bite into his sensitive cock. Toby climbs up next onto ben’s prone body, trampling both the sub’s cock and bollocks at the same time and causing it to let out an even more pathetic cry. 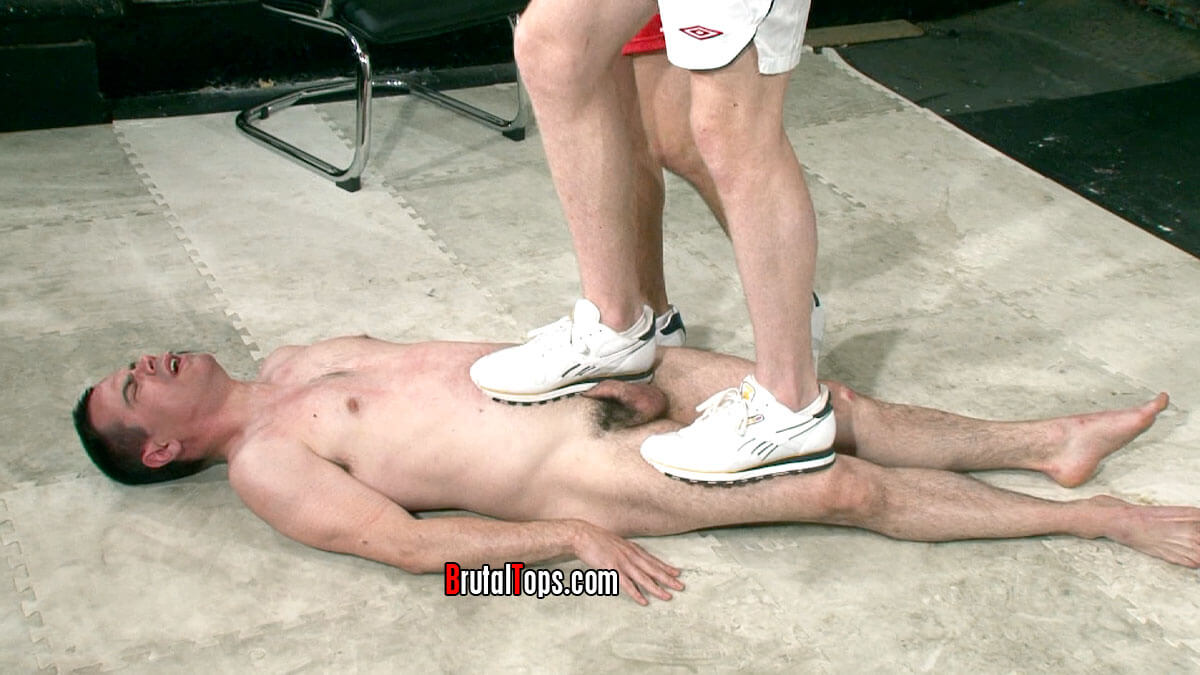 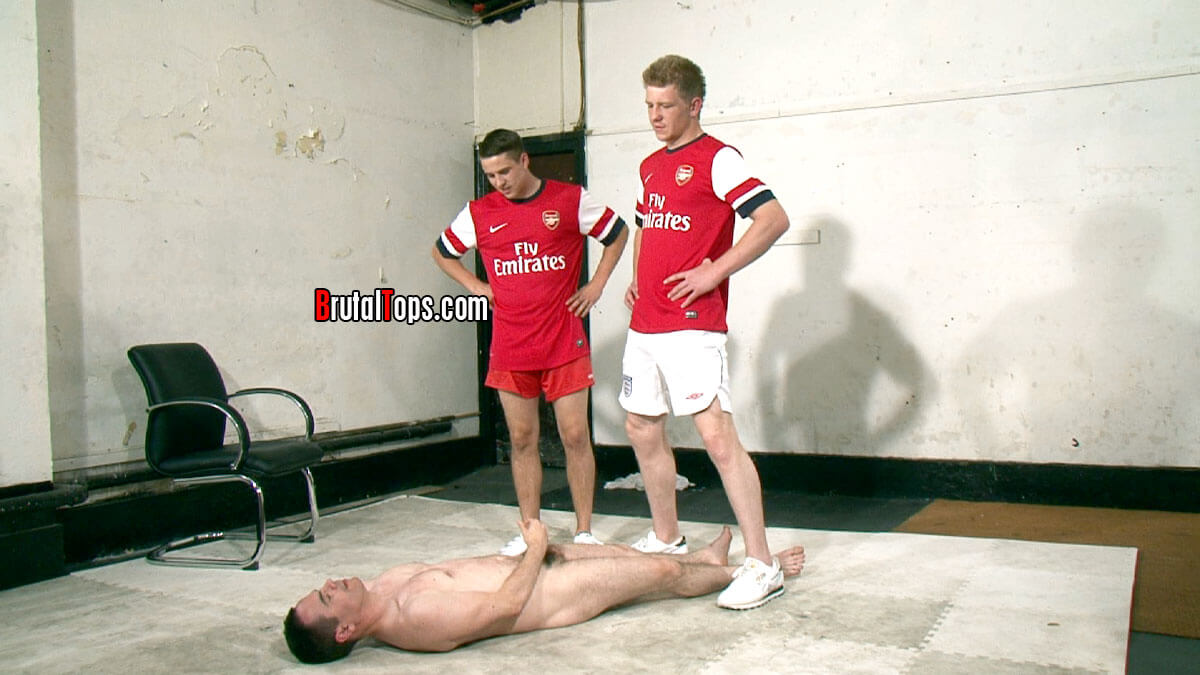 This Tottenham scumbag sub is about to find out that supporting the wrong football team is not the most humiliating thing that he can do. Teasing ben with their perfect bodies, young suckable cocks and pert fleshy buttocks the Masters drive the sub towards his orgasm. 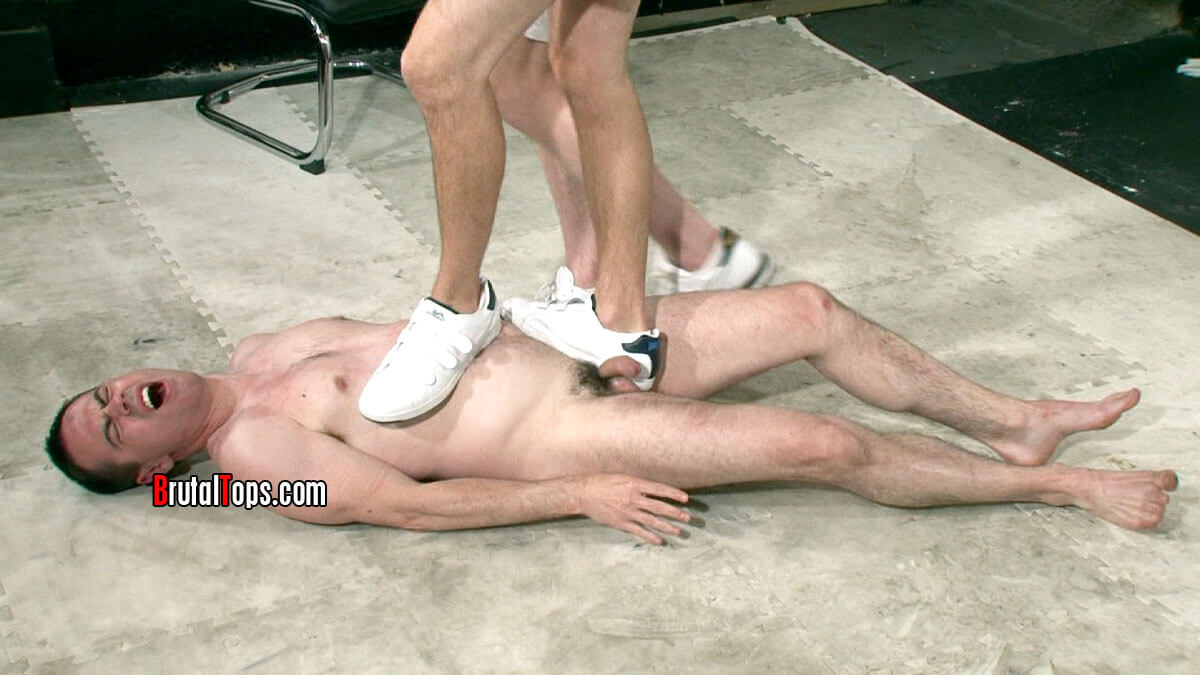 Toby squats over ben, lowering his beautiful arse onto ben’s face, ordering him to dig deep with his tongue and rim him, tasting his Master’s shit chute as he is made to wank harder and faster. Derek swaps places with Toby, pinching the sub’s nipple as his own pungent ring piece gets serviced by ben’s tongue. 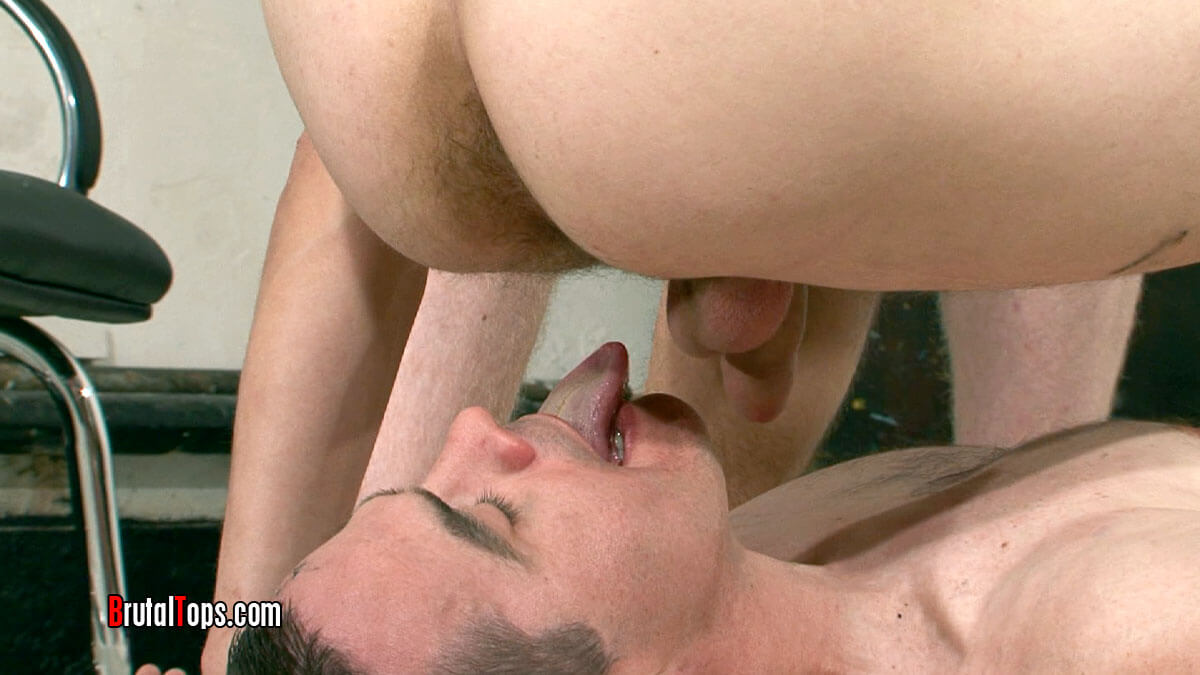 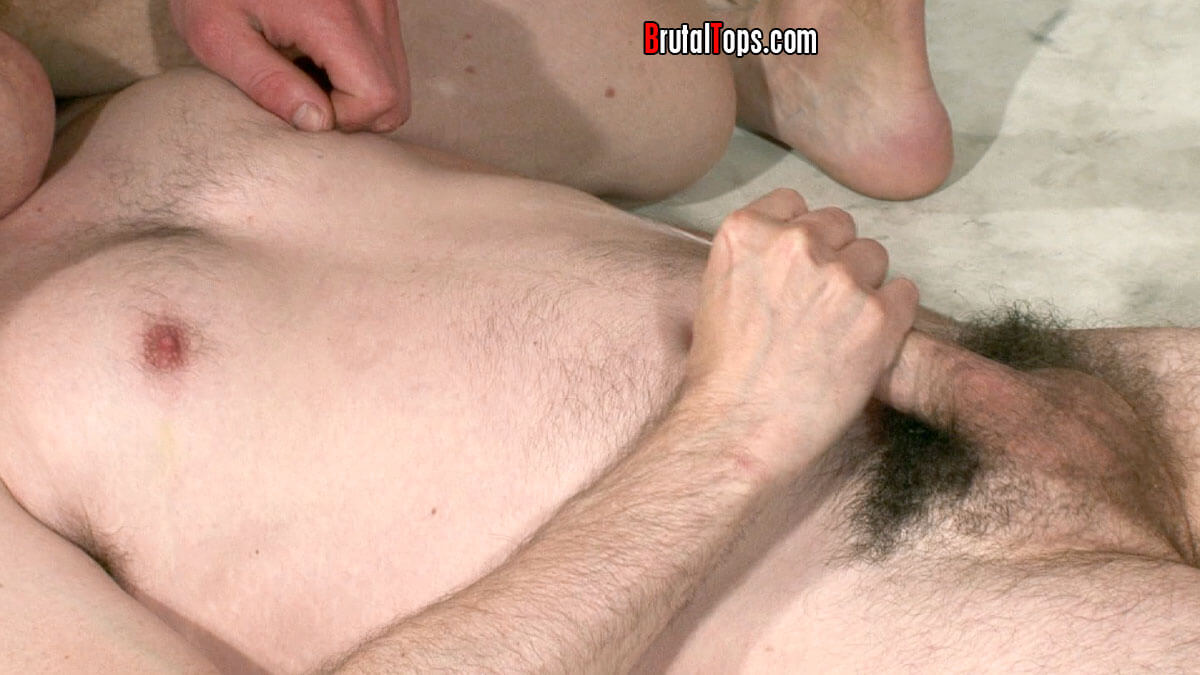 Derek and Toby have a reward for Spurs fan ben. He supports a shit team so they drop two stinky farts right into his mouth. 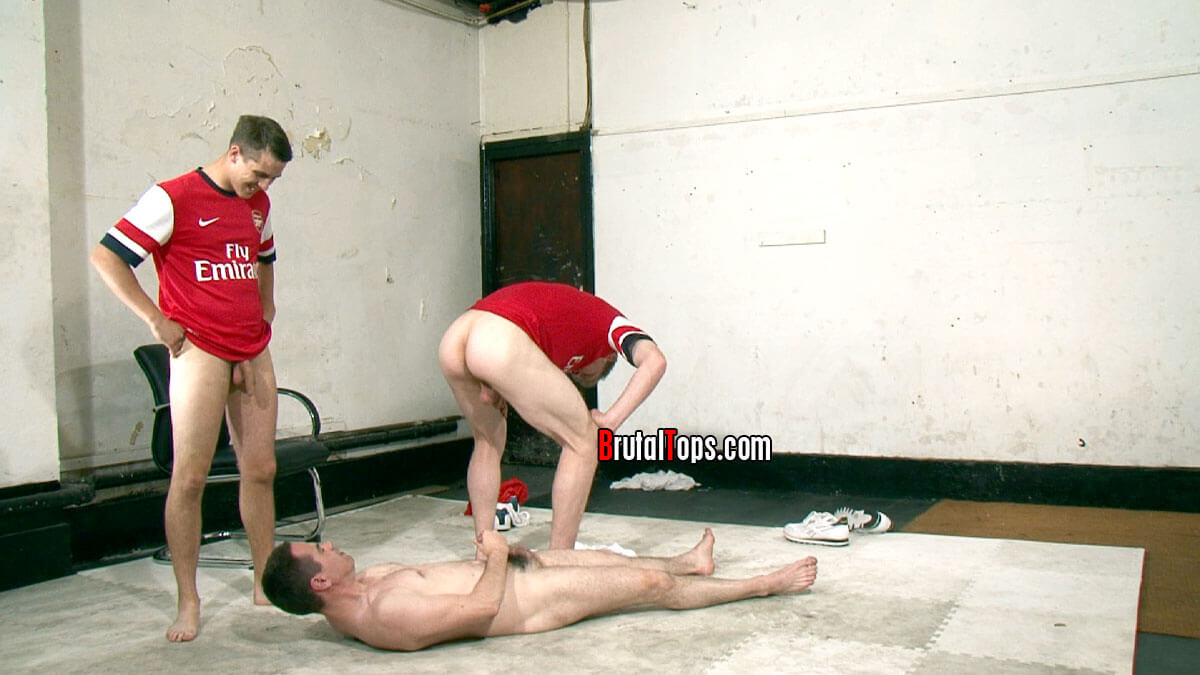 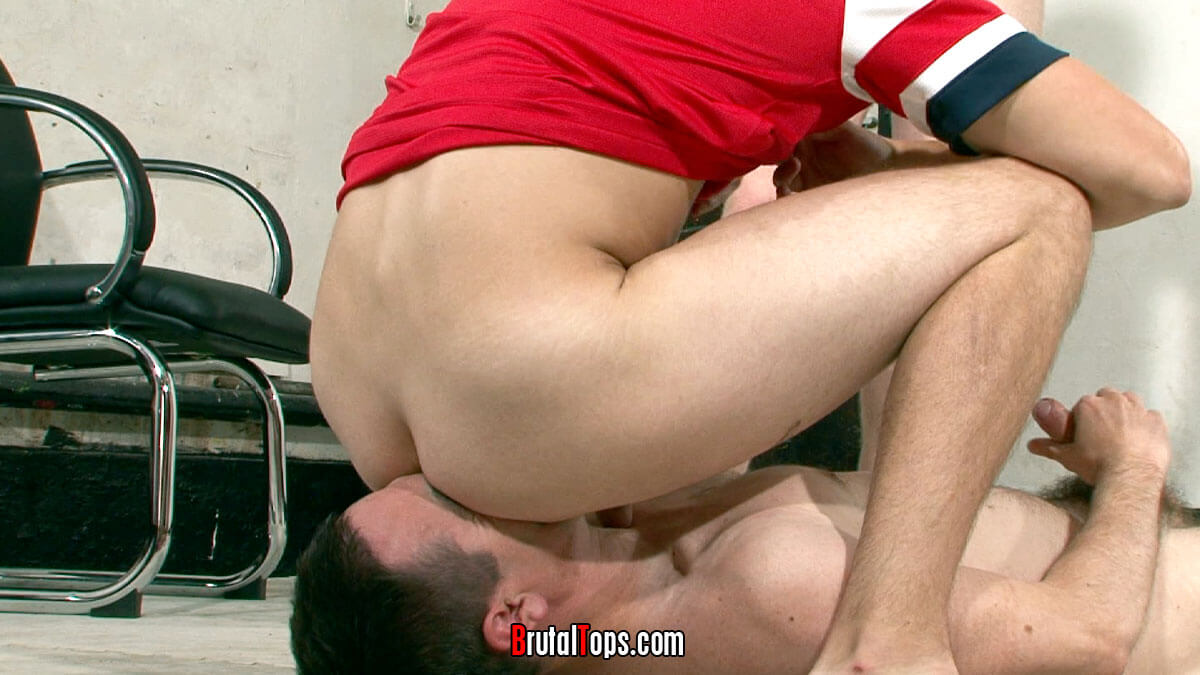 How to Control a Slave at Work

This website uses cookies to improve your experience while you navigate through the website. Out of these, the cookies that are categorized as necessary are stored on your browser as they are essential for the working of basic functionalities of the website. We also use third-party cookies that help us analyze and understand how you use this website. These cookies will be stored in your browser only with your consent. You also have the option to opt-out of these cookies. But opting out of some of these cookies may affect your browsing experience.
Necessary Always Enabled
Necessary cookies are absolutely essential for the website to function properly. This category only includes cookies that ensures basic functionalities and security features of the website. These cookies do not store any personal information.
Non-necessary
Any cookies that may not be particularly necessary for the website to function and is used specifically to collect user personal data via analytics, ads, other embedded contents are termed as non-necessary cookies. It is mandatory to procure user consent prior to running these cookies on your website.
SAVE & ACCEPT